Maria is a member of the ensemble at the Komische Oper Berlin since the 2016/2017 season and her roles for the 19/20 season include Olga in Tchaikovsky’s Onegin, Maddalena in Verdi’s Rigoletto, both directed by Barrie Kosky, Flora in a new production of Verdi’s La Traviata, directed by Nicola Raab among other roles.

Recent engagements outside the Komische Oper include the role of Alto in the world premiere of Hector Parra’s “les Bienveillantes” directed by Calixto Bieito at Opera Vlaanderen. Emmy in Marschner´s Der Vampyr, and Oreste in Offenbach´s La Belle Hélène, both at the Grand Théâtre de Genève. Marscha in Tchaikovsky's Pique Dame with Mariss Jansons conducting and Delia in Rossini's Il Viaggo a Reims, both at the Dutch National Opera. Zweite dame in Mozart's Zauberflöte at the Gran Teatre del Liceu and Mlle Dangeville in Cilea's Adriana Lecouvreur at La Monnaie Opera, conducted by Evelino Pidó. At the Staatstheater am Gärtnerplatz Maria was seen as Dorabella in Mozart's Cosi fan Tutte. She also sang the role of Zweite Magd in Strauss' Daphne and Alto in Wolfgang Rihm's Jakob Lenz, 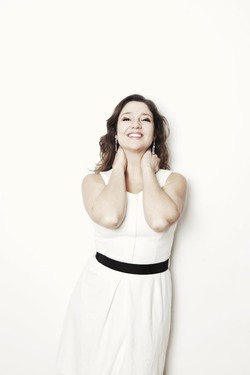 both at La Monnaie in Brussels, La Contessa di Ceprano in a concert version of Rigoletto, and Kate Pinkerton in Puccini's Madama Butterfly, both at the Concertgebouw Amsterdam. She sang a concert performance with highlights of Carmen at the Miyazaki International Music Festival in Japan and Susie in Bernstein's A quiet place in a production of Ensemble Modern at the Konzerthaus Berlin and the Dresdner Musikfestspiele. At Opera Holland Park in London she sang the roles of Suzuki in Madama Butterly and Serena in Wolf-Ferrari’s I Gioielli della Madonna.

Maria also made a surprising appearance in 2018 on Dutch Television, where she was seen in the program "De Beste zangers van NL". A program where singers from different music styles perform songs for each other, stepping outside their own genre.

Maria has worked with conductors such as Kent Nagano, Mariss Janssons, Lothar Koenigs, Evelino Pidó and Henrik Nanasi. She was also under the direction of internationally renowned directors such as Stefan Herheim, Andrea Breth, Barrie Kosky, Robert Carsen and Damiano Michieletto.

Maria studied at the Royal Conservatoire in The Hague and was also a member of the National Opera Studio 2012/13 in London. She studied with Sasja Hunnego en Frans Fiselier en participated in several masterclasses given by Brindley Sherrat, Christa Ludwig and Joyce Didonato. In 2012 Maria won six prices at the International Vocal Competition in s'Hertogenbosch, including the young talent award.